Is it impossible to travel to other planets?

Posted by SuperiorMorality on September 25, 2014
Posted in: Uncategorized. 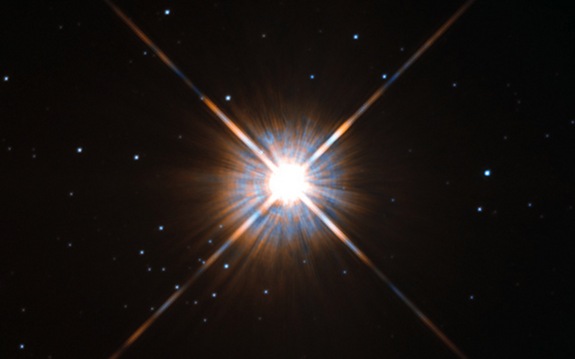 An actual photo of Proxima Centauri from the Hubble Space Telescope

I am feeling that way at this moment. I’m not feeling this way over someone or some object, I am feeling this way because I feel like humans are trapped within our solar system. I’ve recently watched a documentary called Space: Unraveling the Cosmos. The trailer can be seen here on YouTube. This documentary finally explains the vast distances to other star systems and other galaxies in an interesting and comprehensible way in which most other videos have not. It sunk in over the next few days how impossible the distances are to travel and the technology needed to do so. Also, the sheer number of people and man-hours involved. Then it started to seem impossible. Utterly impossible to travel anywhere outside the solar system. It just takes far too long and you would need a self-sustaining lifeboat. It would take generations even at an astonishing speed of 1/10th the speed of light. Also, this documentary fails to point out, like countless other videos, is that once you get to reach these incredible speeds: How do you slow down? There is no resistance in space. There is no drag. There is nothing to stop the momentum. Imagine all the rocket fuel needed to accelerate an object into space. You would need to carry just as much with you to slow down.  As a person grounded in day to day doldrum of life on earth its hard to imagine what this means. Put it this way: Speed and acceleration gets you to other stars. You know a Ferrari or Lamborghini has a lot of horsepower and big tires to make it fast and go 150MPH or faster, right? Now imagine requiring just as much horsepower to slow it down, rather than using the brakes. That’s the problem with space travel.  The spacecraft would be traveling at such a velocity it would just go right passed the entire alien solar system it was sent to explore. Scientists have suggested aerobraking. However, that is very dangerous and difficult. It may also require repeated passes of skimming through the atmosphere of planets to slow down.

The closest solar system to Earth: Alpha Centauri. Oh… yay… only 25 TRILLION miles away from earth. :-(

So now, we are stuck. Even at the speed of light (an impossible speed to actually reach, by the way) – it would be many years to reach another star system. And to go beyond our galaxy? Forget it. Our species will never live that long. It will take 2.5 million years to reach the closest galaxy: Andromeda. There is just no way to make any sort of spacecraft to last that long and travel at that speed. Human’s themselves are only about 1 million years old as a species. What will we be in another million years? If we even survive that long.

Posted by SuperiorMorality on September 25, 2014
Posted in: Uncategorized.
Questions: #1: The ADMITTED LIAR 24-year-old Ronald Ritchie who called 911 saying there is “A black guy” running around the store “pointing a gun at everyone” lead to John Crawford’s death. #2: The MILITARIZED POLICE run in with an AR-15 and just shoot him dead. No yelling for him to drop the pathetic BB gun. They didn’t secure the store. They are trained to kill rather than resolve the situation through diplomacy. They could have secured the store, got on the PA and made an announcement and surrounded the guy. But of course, if you’re a cop, trained to instinctively kill people the moment they lift a finger to you, this is what happens. This man was murdered. There was no assessing the situation. There was no police commander that went into the video surveillance room. Absolutely nothing was done to handle this situation correctly. The police, the  adrenaline-addicted, paranoid, fearful, tunnel-vision-suffering, trained-murders they are simply ran in and shot him. I am sure this poor black guy wasn’t thinking. But he did not deserve to die. All he probably did was just simply turn and look at the cops while holding the BB gun. They see the barrel point towards them and they shoot-to-kill rather than shoot-to-disable. Again, these cops are trained killers. God help everyone of us from our government and our police force. You are more likely to be killed by police than you are by terrorists. 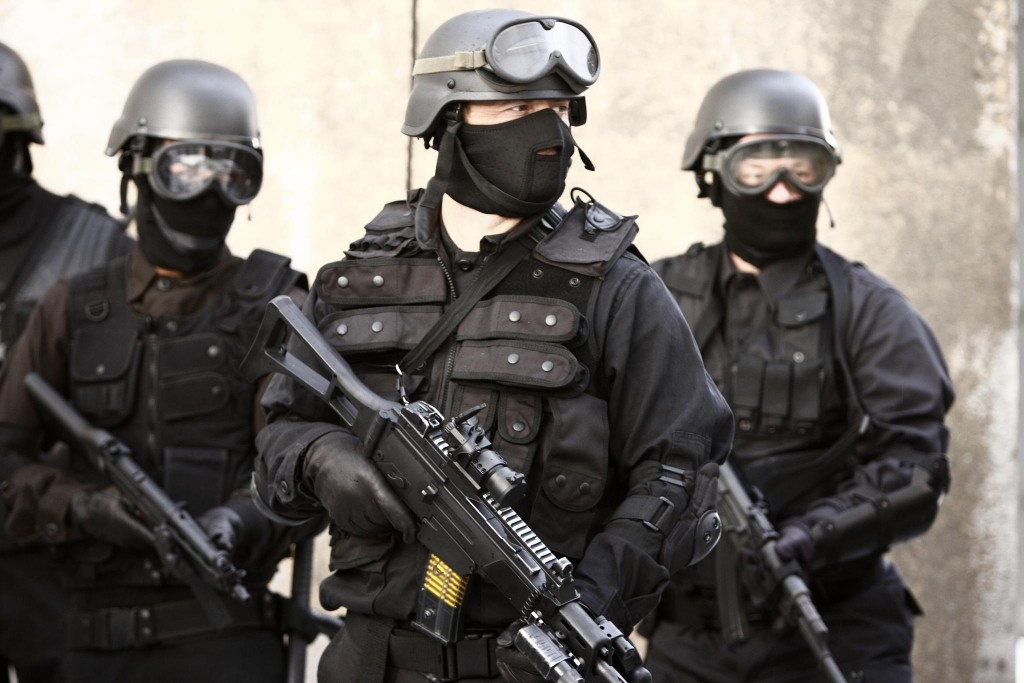 Police have killed 5,000 people since 9/11. Click above image for further reading

Are these “police men”? Are they military? Are they “storm troopers” from some dystopic film like Equilibrium? No. They are your local police in full citizen assault combat gear, ready to break down your door and murder you and your family in a no-knock raid. To “keep you safe” of course. Why are their faces covered? Why are they wearing all black? Why are they armed to the teeth with machine guns and body armor? They are there to protect you, right? They are there to save you from the bad guys, right? What if they are the “bad guys”? They have been caught going into the wrong house and killing someone and then trying to frame the innocent person they murdered.
Swat team shoots innocent man 22 times in front of his family – case settled in the millions. No manslaughter charges, no murder charges, nothing but a fine that you as a tax payer pays for. There is absolutely no deterrent for this happening again.

Watch in horror as these murdering thugs kill this man in front of his family in less than 10 seconds after they break down his door.

Just as easily as you would blow out a single candle, this man’s life was taken from viciously him in front of his family. He was riddled by a barrage of bullets from a highly skilled attack team trained with a single purpose: to kill people.

Are the ISIS beheadings fake?

Posted by SuperiorMorality on September 14, 2014
Posted in: Uncategorized.

Recently there has been a few beheading videos. These initial videos have been released by an organization known as SITE Intelligence Group. They have released fake Bin Laden videos in the past. I have my doubts these beheadings could be real. This is what is happening. This SITE organization is finding these videos in deep dark corners of the internet and then editing them (censoring the brutal endings) and then dishing them out to dinosaur, establishment media all over the USA. Then these “media” outlets run with it like its the word of god. The edited/censored videos are touted as irrefutable proof that this is happening.

What makes me so suspicious is the timing, location and release of these videos and most of all; the behavior of those people that are minutes away from death. I do believe these people in orange are killed (eventually). But I find it all so suspicious. I am not them, but if I were in their position, I would be beat up, bruised and bloody. Because I am not going to sit there like a good little pawn and just wait to have my throat slit. I would have to be drugged and tied to a chair before I would sit pretty enough to make a picturesque video for the elite to justify more wars, more bombings, more destruction and more death.

Foley murder video ‘may have been staged’

Analysts believe the British jihadi in the video may not have been James Foley’s killer, although it is accepted that the journalist was murdered

Posted by SuperiorMorality on September 9, 2014
Posted in: Uncategorized.

Please answer this: I am having a difficult time understanding how evolution creates such things such as this Mantis Shrimp.  I was a firm believer in evolution. I was. Growing up I was indoctrinated like anyone else. I was told this was right. And that is wrong. Then I began to think about things and question things. Neil deGrasse Tyson or any other scientists, theorists, etc. all say that its the result of “millions of years of evolution”. Even with millions of years and “tiny mutations over time of trial and error”, it still doesn’t stand to reason. I am grappling with how this “evolution” happens. I’ve seen a documentary (“What Plants Talk About”) that demonstrates when a Tobacco plant is attacked and eaten by a type of caterpillar, the plant then releases a chemical that attracts the predator of that particular bug. So the plant saves itself by calling for help. How is that possible? How does the plant know what type of bug is eating it? How does the plant even “sense” what chemicals bugs put off? It has no chemical receptors (a nose). It has no brain. It has no nervous system. And how does it keep up with the chemical changes in other bug species. How does it know that a particular bug eats another bug? And please don’t say “time” and “mutations” or “God”. Thank you.